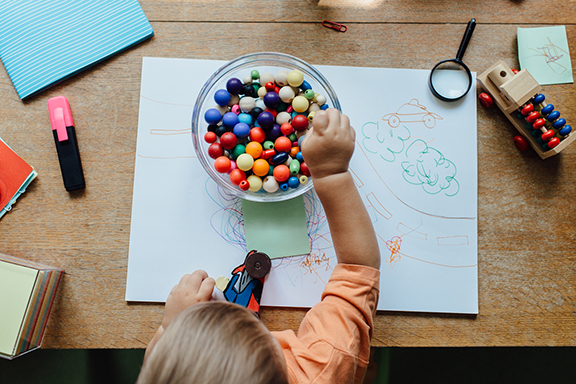 Parents often wonder if their young child is on the right track when it comes to understanding numbers. How high are they counting? Can they accurately count objects? When will they be able to add? What people may not realize is that while each child learns numerical skills at their own pace, they generally learn them in a predictable sequence. With this progression in mind, we can explore ways to support a child’s math skill development in early childhood.

Let’s start by considering a more familiar area: learning to walk. Most children follow a developmental sequence when they are learning to walk. Babies can roll from front to back and vice versa between 3 and 6 months old; at around 6 months old they can sit without support; between 9 and 12 months old they begin to crawl, walk with support, and stand momentarily; and at 12 to 15 months old they stand alone well and begin to walk. Then chaos ensues as they climb on furniture, run, and jump (and, sooner than you think, ask for the keys to the car). There is a lot of variability in when children first accomplish these tasks, and we probably all know a child who skipped one or more stages completely, but in general, typically developing children move through the sequence in order and within a predictable age range.

Most parents have an intuitive sense of how to support their children through these stages. For a child sitting independently, parents may place a toy just out of reach, encouraging the child to reach further and end up on their hands and knees to develop the coordination and strength needed to crawl. Later on, parents stand just a few inches, a few feet, or a few yards away, gauging the distance needed to best to encourage their children to walk to them.

Likewise, children’s development in different areas of math also follows a predictable and well-researched developmental sequence. Parents who keep children’s math development in mind can offer them support in intuitive and natural ways, just as they did with learning to walk. Physical development encompasses many different domains, including gross motor skills like walking, fine motor skills like learning to hold utensils and feed oneself, and so on. Mathematical skill development also has many different domains: at preschool age, for example, broadly there’s counting, geometry, and patterns. In this article we will take a close look at counting and comparing, as a template for understanding the importance of knowing where a child is in a given domain of math, where they are going next, and ways to support them getting to the next stage.

Children’s development in counting begins early in infancy and progresses through a sequence of stages. Here are some of the stages in counting that typically occur between the ages of late 3s and early 5s. During this time, a child is solidifying their understanding of numbers between 1 and 10 and strengthening their understanding of the relationships between placement in the number sequence and quantity (i.e., “7” is later in the counting sequence and represents more than “3,” which is earlier in the counting sequence).

If you have a preschooler, you might already be starting to think about where your child is in the four stages sketched out above. One or two quick counting activities per day, if they are right in the area the child is working on and neither too hard nor too easy, is enough to strengthen a child’s math skills and confidence:

Counting grapes on a plate at snack time, blocks in a tower, or crayons used for a drawing can be just right for a child learning to count objects up to 10.

A box of fun buttons or bowl of goldfish crackers, or any other object that a child finds interesting and engaging, can support a child ready to count objects to 20 and 30.

Combining physical activity and number can come in the form of jumps or hops, floor-to-ceiling stretches, or bear crawls across the floor.

Counting down from 10 to 1 can come in the form of seeing how quickly a child can get undressed for the bath, eating crackers from a line, or tossing stuffed animals into a laundry basket.

Playing Blast-Off, by counting down from 10 to 1 and then doing a huge jump, or having an adult toss a child up in the air, is a generations-old way to teach backwards counting.

Building staircases of cubes or blocks, and stopping to think about which number comes next, can solidify the next stage.

What if your child seems “stuck” in one stage? Take a moment to recall when your child took their first steps. What an exciting moment! For months beforehand, you probably provided all the support you could—you had a coffee table or an Exersaucer that was at just the height they needed to grasp, you held their hands as they practiced, you cheered them on. Remember, though, that no amount of daily “practice” would get your child to take that first step before they were ready, and persistent parent insistence would have been detrimental rather than helpful.

In the same way, a child might “hang out” in a mathematical stage for a long time. Your child may spend months and months learning to count up to 10 objects accurately, and you may begin to tire of waiting to see that next level. Do not worry! The work you do with them in each stage builds a strong foundation of understanding and experience for the next stage, and they will move into it when they are ready. Sometimes children stay in particular stages for a long time and then zoom through the next two stages seemingly overnight. Sometimes they move at a steady pace. And sometimes (this is always a little alarming) they regress before moving forward. It’s all normal. If you continue to be playful, observe their engagement and level, and offer short counting activities integrated into their daily life, you are doing more than enough to support their learning.

Another developmental sequence that occurs in predictable stages is comparing. At first, toddlers compare groups based on perception rather than counting. Children then shift to a strategy of matching objects one to one to compare sets. Then there is a shift to counting as the main strategy to compare sets. At first a child is only able to compare sets of items where the items themselves are about the same size. Children gradually learn to separate quantity and object size so that around 5 or 6 years old, they can compare quantity regardless of size. As children’s mental number line strengthens, they know that 7 is more than 5 without needing to refer to objects.

Note that the question of “how many more?” (or “how many fewer?”) is on the addition/subtraction sequence and is generally difficult for children coming to an early understanding of more, fewer, or same. Parents who ask “how many more?” can rescue a confused child by modeling a strategy (“Oh, I think I’ll count the extras to see how many more”) and then tabling that question for a few months before trying it out again.

In the chart examples, we focus on comparing sets of objects that grow increasingly dissimilar in size to support children learning how to compare number regardless of the size of the objects. The ability to compare numbers themselves is tightly linked with counting and the ability to understand number, and development in those two domains are complementary. Let’s look at the card game War (we like to call the game “Compare”) as an example of how comparing and counting can work together.

Children typically begin to enjoy the traditional card game of War when it naturally fits their developmental level—they can easily count and compare numbers from 1 to 14; they are not distracted by the suit of the cards; nor are they distracted by the inclusion of Jacks, Queens, Kings, and Aces as proxies for 11, 12, 13, and 14. This is often around first grade. War is a great game for strengthening children’s ability to compare numbers, and with a few tweaks and homemade or printable cards, parents can make the game fun for children at a variety of developmental levels.

Here is a progression of War starting around early 4s. You can play this game once a week or once every two weeks through early elementary school, changing the cards, number of decks, and operation to follow your child’s development. This game moves from the comparing sequence to addition and then multiplication.

War with 1–5. Play War with card decks that only include numbers 1 through 5. To make it easier for children, instead of using playing cards, print several copies of counting cards (counting cards show both the number and a ten-frame dot representation of the number).

Two-Deck War, +1. Create two decks of cards for each player. A player turns over a card from each deck and adds them before comparing the total to their opponent’s. In the first deck, include cards with 1 to 5. In the second deck, include only 0 and 1. This will help support very early addition. Don’t be surprised if the child needs to count aloud to find their total. A child with a card showing 4 and another card showing 1 may need to re-count 1 to 4 and then count 5 rather than counting on from 4. Gradually increase the first deck until numbers 1 to 10 are included, with the second deck still including only 0 and 1.

Two-Deck War, +2 and beyond. Increase the second deck to include numbers 0, 1, and 2, gradually adding higher numbers as your child is ready.

War can also be varied in several ways to meet children’s developmental levels:

Vary decks so that one set is only numerals and one set is counting cards (numerals with dots). This will encourage children to count on from the numeral card.  Staying with counting cards for a bit longer than you think they are needed.

One or two cards turned over at a time (or three! If your child loves the game).

When children are learning multiplication, play two-deck War with the numbers that they are comfortable multiplying, using the same strategies of varying the decks to suit the child’s developmental progression in multiplication.

Children’s development in math domains is not as easy for parents to see—nor as intuitive for them to support—as physical development or development in language. But with a little bit of knowledge about mathematical development; a bit of observation about what is too easy, too hard, or just right for your child; and some simple activities that fit into everyday life, children’s understanding of math can be enriched and strengthened. Even better, children can build confidence in themselves as mathematical thinkers and use these skills to understand the world.

This article first appeared in the 2022 issue of the Parents League Review. Get the current issue of the Review free with a family membership. Or purchase it separately. 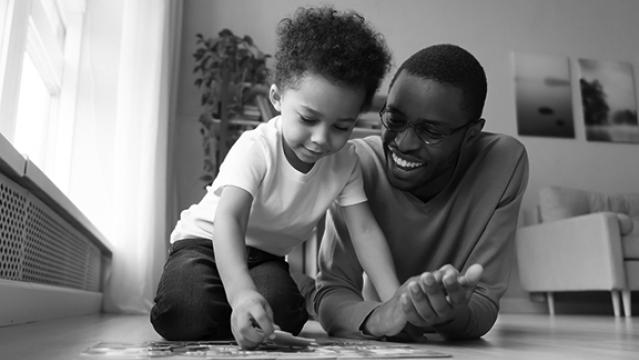